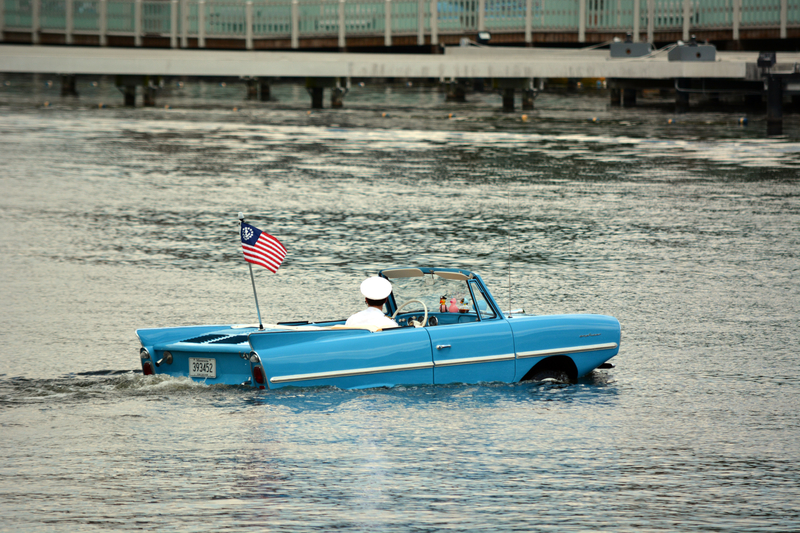 Being in a car or a boat is nothing any of us deems special enough to write home about. Yet, combine them and tourists will flock for a chance to ride an amphibian vehicle. Why we are so fascinated with them is hard to put your finger on, but the fact is that they capture our imagination and inventors regularly come up with strange and beautiful vehicles equally at ease on land and water.

The place of honour should definitely go to our own Kiwi-born entrepreneur Alan Gibbs, who founded Gibbs Sports Amphibian in the 1990s. The company developed a new technology, the High-Speed Amphibian (HAS) platform.

Over two decades, the company has produced some fine-looking vehicles equipped with proprietary technology which enables its vehicles to reach 50 km/h (30 mph) on water, and land speeds equivalent to any conventional car. The transition from land to water involves nothing more than flicking a switch for the driver.

The Aquada, for example, looks everything like a sports car, with a discreet wavy line to express its amphibious lifestyle. Unlike other amphibious vehicles, it isn’t a modified land car, but was specifically designed to be equally at home on water and dry terrain. It was made famous by an illustrious driver, Richard Branson, who crossed the English Channel in a record 1H40 in 2004.

The Quadski is an ATV that transforms into a personal watercraft. Thanks to its jet propulsion system and wheel retraction, it can reach very honourable speeds of 72 km/h (45 mph) on land and water and can transition from an ATV to a watercraft in 5 seconds.

The 5-seater Humdinga is a full-time 4WD concept vehicle powered by a V8 engine. It is destined for accessing particularly difficult terrain, and one can imagine how useful it would be for rescue services and military applications. It is capable of top speeds of 160 km/h (100 mph) on land and 65 km/h (43 mph) on water.

The Amphicar was an amphibious car produced in Germany at the beginning of the 1960s.

Its engine was fitted at the rear of the car, powering the rear wheels with a 4-speed manual transmission. On water, this engine drove a pair of propellers at the rear, either forward or in reverse drive – the main land gear level usually left in neutral then. When you wanted to drive out of the water, both the land first gear and the propellers needed to be engaged.

Unfortunately, the Amphicar’s performance wasn’t terribly impressive. When it came out of the water, it required greasing in 13 places, including one that could only be accessed by removing its rear seat. Despite those flaws, it is still one of the most successful non-military amphibious cars of all times.

This strange-looking car was unveiled in 2004 at the Geneva Motor Show. A concept vehicle, it was never produced commercially. As far as amphibious cars are concerned, it could reach rather impressive speeds of up to 45 knots on water and would cruise like a boat under 30 knots. On land, it had nothing to envy to sports cars and could reach 200 km/h (124 mph) thanks to a two-cylinder turbo–charged engine.

It has been featured in Top Gear and set a new record in 2006 for crossing the English Channel in a hydrofoil car in 3 hours 14 minutes.

If you feel the need for speed, then the Hydra Spyder is for you. A 4-seater sports car with an open top, it is so powerful on water that it can pull a water skier without breaking a sweat! It is powered by a Corvette V8 engine so it is no surprise that it recorded speeds of over 200 km/h (125 mph).

The Sea Lion is a bit of an oddity in that it was produced by an individual rather than a company. It was a labour of love for its inventor, Marc Witt, who took six years to complete the project.

Witt’s ambition by creating this car was to earn it the title of fastest amphibious car in the world. Built with a Mazda 174hp rotary engine, it was indeed pretty impressive on water when it was finished in 2012 as it was capable of reaching 95 km/h (60mph) on water.

Unfortunately, its claim to fame was short lived as other amphibious vehicles quickly caught up. However, the car was built in such a way that it can be retro-fitted with a more powerful engine to increase its performance, so we may hear about the Sea Lion in the news in the future.

Self-titled ‘The builder of the most fun vehicle on the planet,’ WaterCar is a California-based company founded in 1999 with the goal to build amphibious vehicles to break records.

Its first offering was the Python, the results of fourteen years of hard work and technological advances requiring no fewer than 27 patents. Did it fulfil its purpose? It did, breaking the water speed record at the time with 96 km/h (60mph). The vehicle garnered a lot of attention and several models have been custom-built for enthusiast clients.

WaterCar then released the Panther which is almost as fast as a speedboat with speeds of up to 72 km/h (45 mph), facilitated by a lightweight chassis of chromoly steel.

If you’re thinking about buying an amphibious car and importing it into Australia, you may well find that compliance with road and safety standards is an issue! But for any other type of vehicles, give us a ring to find out what we offer. With over 20 years’ experience in international shipping of cars, motorhomes, bikes, caravans and boat, you can rest assured that yours will be in good hands with us.

You can also request a quote online or contact us via our form.

Military Vehicles You Can Buy
Posted on 31st March 2017
If you like making heads turn, you can buy a classic car, one that will awe people with its beauty and history. Or you can buy something a little bit different. A police car perhaps, or if you want something really out of the ordinary, why not buy a military vehicle? While some of them, like the "Duck" amphibious truck, might be difficult to park in the street, others can actually be used every day.
Read more